Ran into this on Twitter. Interesting. You can read the whole thing online: 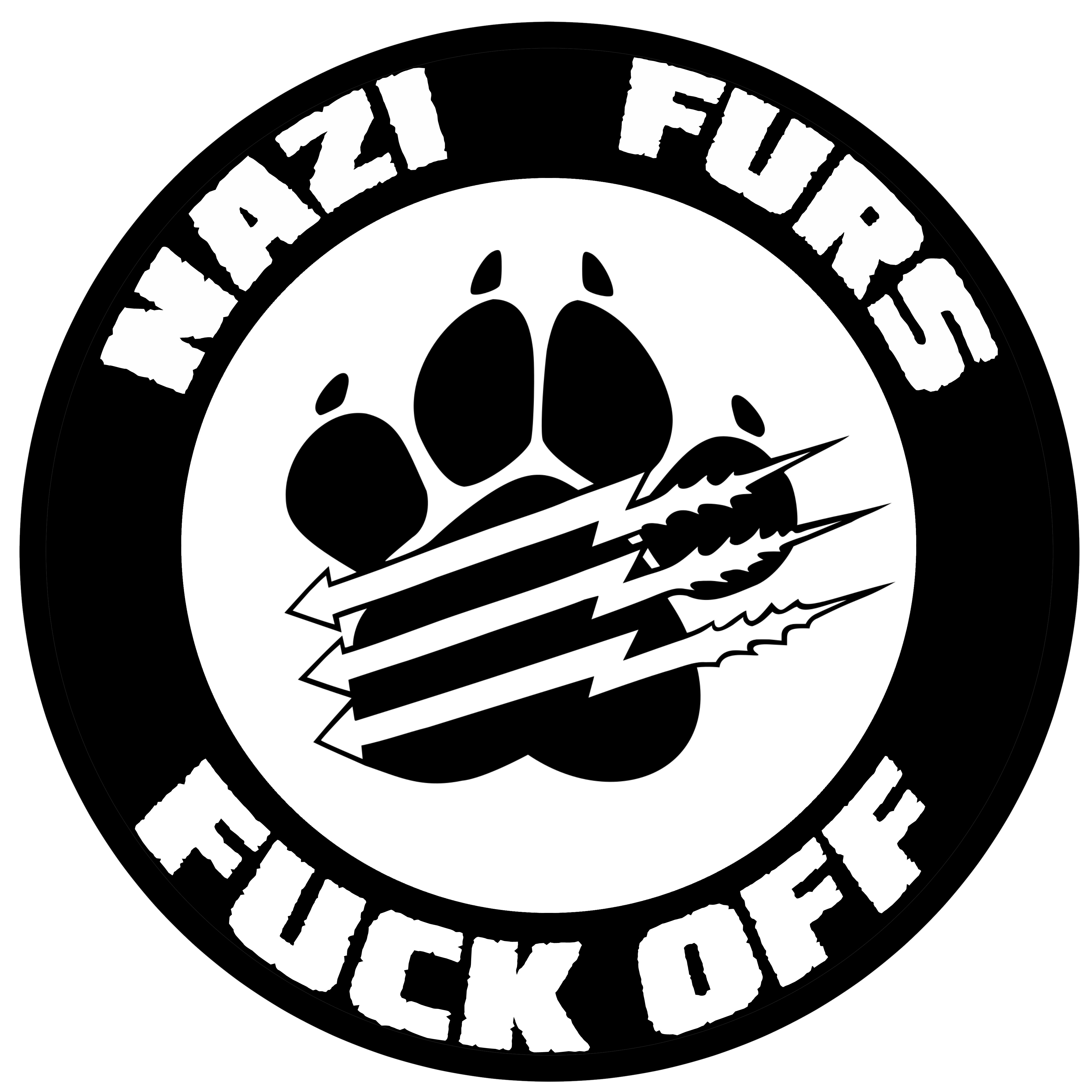 Beginning in January, Red started getting calls from groups of furries who wanted her help fighting Nazis.

Red—who did not want me to use her real name because members of her subculture who speak to the press can be blacklisted from events—knows her stuff. The 26-year-old Chicagoan has been dressing up in a fur suit since 2008, and joined Antifa International three years later, after getting involved in the Occupy Wall Street protests. Antifa International (for anti-fascist) is a group dedicated to fighting right-wing politics, and to achieve that mission antifas are prepared to do anything up to and including punching Nazis. But Red, who believes fascist rhetoric should be met with a closed fist—or paw—wasn't sure the furries were prepared to do what it took.

"Most furries find any kind of violence abhorrent," she told me.

The furry fandom is one of the most inclusive subcultures on the internet. Many furries are queer, and most are used to being ridiculed for their "fursonas," anthropomorphized animal avatars that are used in roleplaying that sometimes (but not always) gets sexual. But even the furry community isn't immune to the political upheaval sweeping through America. Instead, it's a microcosm—albeit an odd one—of the culture war that the rest of the country is consumed by. The furries who called Red faced a question all too familiar to many people today: What should be done about far-right figures coming out of the shadows?

To be clear, Nazis are not new to the furry community. All the way back in 2007, a group called Furzi clashed with Jewish users of the game Second Life, which is a popular place for furries to congregate. Several members of the fandom told me that the ideology has festered among some furries ever since. More recently, a group called the Furry Raiders has become emboldened by the campaign, and eventual victory, of Donald Trump.

The Raiders are led by Lee Miller, a 29-year-old Furry who goes by Foxler Nightfire—a blue-eyed character who wears a red-and-black armband that should be familiar to any student of world history. Although he's been a known quantity within in the fandom for years, Foxler drew wider attention in January when he tweeted out a picture of himself with the hashtag #altfurry.

In late November, before "alt-furries" or "Nazifurs" attracted media attention, group called Antifa Furries formed to try to address the growing problem. Its goal is to get Nazifurs banned from events and to encourage furries to get involved in politics—efforts that seasoned activists like Red think are insufficient when it comes to combatting the far right.

Red told me that when members of the Antifa Furs called her up to ask for advice, they didn't like what she had to say. Though being "anti-fascist" seems like an obvious position to take, especially at a time like this, many antifas advocate property destruction and other forms of lawbreaking—which, Red said, the Antifa Furs weren't up for.

"Everyone jumped on this antifa bandwagon, but they are getting in over their head," she told me. "It's not for all liberals. It's for anarchists and for communists. It's not for people who wanna hold a sign or sign a petition. It's for people who are willing to do whatever is necessary to stomp out fascism."

Instead of fighting Foxler with violence, the Antifa Furries decided to go with a strategy of trying to convince people to boycott conventions that didn't ban the Furry Raiders from attending—a fairly roundabout way of ostracizing one's enemies.

Fiver, a soft-spoken 20-something member of a group called the Antifa Furries, told me that furries—who tend to be both gentle and geeky—may be reluctant to expel problematic community members because they're afraid of being as intolerant as the people who bullied them in high school.

"While we do desire to be as accommodating and accepting as possible, this attitude has also required the acceptance of Nazis who will turn around and tell you that if you don't accept them, you're the real fascist," he told me.

When I talked to Lee Miller, who lives in Fort Collins, Colorado, he told me he's been into the fandom since he was 12. According to the high school dropout, his Nazi-esque armband originated as a Second Life accessory—but it's difficult to pin him down on what it actually represents, or what he actually believes. During the course of our conversation, he oscillated between claiming ignorance and irony. When I asked why he won't just take off the armband to end the drama, he unspooled a story about how the character of Foxler was based on his deceased father and that changing it would be tantamount to disrespecting his memory. When I asked about his politics, he said that they're starting to change in reaction to all the backlash he's received from people offended by his outfit. Before all of this, he used to look exclusively at 4Chan, he says, but now he's starting to read about "SJWs" and "safe spaces" and getting more involved in what might be termed slightly more mainstream right-wing modes of thought.

"Why are people trying to control my existence or tell me what I can and can't do when it's within the law?" he says. "I've never really driven into politics, but I need to get more serious about them now that all this is happening."

Miller says he originally supported Bernie Sanders, but now agrees with at least some of Trump's views. He also admires Trump's campaign tactics and the way the orange-faced provocateur played the media into giving him coverage. Meanwhile, furries aligned against him say Foxler/Miller has emulated these tricks. They say that he'll say anything to anyone as long as it increases his popularity and gets him more followers. It doesn't matter that he's bisexual, or that his boyfriend is a minority, because aligning himself with white nationalism has given him a platform. His backstory and its apparent contradictions make him vaguely similar to Milo Yiannopoulos, the alt-right personality who has built a whole career out of saying things calculated to piss off the left. Miller even attended a Yiannopoulos event last month in full furry regalia.

As for how a furry might be radicalized in the first place, one hypothesis among furries is that members of the fandom congregate on anything-goes image boards like 4Chan, which are also frequented by members of hate groups like Stormfront that will deliberately appeal to lonely nerds. The Raiders, like a fair number of those on the far right these days, can claim that they're just conducting a social experiment or trolling, but their opponents say that's just an excuse that they use to hide their honestly bigoted views.

Ash is a 28-year-old who, like Miller, lives in Colorado and has been working to ban Foxler and his crew from local meetups. Armbands are now almost universally disallowed from the local scene, she told me, and Foxler is also not welcome at a local bimonthly dance party called Foxtrot. One problem, however, is that since people in the community are almost always in disguise at these events, it's impossible to tell who is secretly an alt-furry. Ash and others have been monitoring Twitter and trying to suss out who's been communicating with the enemy, but it's been tough.

Her big target is the Rocky Mountain Fur Con, which is set to take place this August in Denver. Anti-fascist furries claim that members of the Raiders are on staff there and that the con has been silent about their pleas to ban Nazis because they fear violence like the chlorine gas attack that sent 19 Illinois con-goers to the hospital in 2014.

Sorin, the con's chairman, declined a formal interview but instead issued a relatively middle-of-the-road statement: "Rocky Mountain Fur Con does not support or condone discrimination or violence in any of it's forms and is saddened by the hatred and division that has been caused be [sic] a small minority of our community on both sides of this issue."

That division, like the larger one afflicting America, isn't likely to heal anytime soon.

"It's so strange that this is also happening in our community," Ash told me. "But since the fandom is growing exponentially and the group is getting bigger, we were bound to pick up a small sliver of people that are completely off the wall. Foxler would be that sliver."