Yep, there is more than one that Furs are on
http://www.brunching.com/geekhierarchy.html 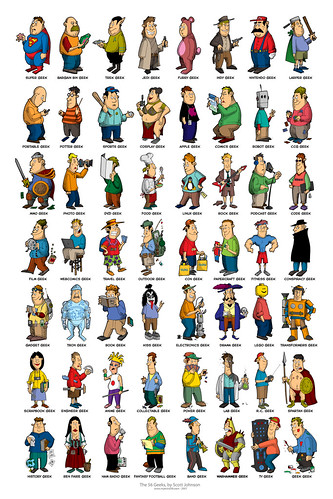 "They asked us to be there, and my friend Scott Shaw, who I've known for decades and decades, had been a guest of honor at the convention the previous year and he said, 'Go to this thing, Mark. Trust me. You'll have a great time. You'll love the people. They're so wonderful.' So you can't really ignore a recommendation like that."

Mark Evanier talks about Anthrocon. Among other things, so you'll have to do some scrolling.

Very nice, only criticism is that we're a bit "defensive." And he's not sure what kind of animals the canid fursuiters where supposed to be, half the time.

sibertyger (aka Timber) & I were taped for a challenge here in Denver on CMT's "The Ultimate Coyote Ugly Search" . The contestants had to sell 2008 pinup calendars; Timber asked if the girls were dressed like coyotes, and I said that none of my friends would want a calendar since they're all furries. We don't know if our clip made air, and neither of us gets CMT, but if any of you happen to catch it, that'd be awesome. ^^

But this time, she doesn't need a costume.

first of all, you can get the new show at http://www.woyroswarren.podshow.com.  i forgot to post the link last time.

this show i wrap up some memories of FWA.  i also make one major complaint about the con.  two, actually.  but they arent MAJOR problems and did not detract from my enjoyment of the con.

also, i talk about AVENUE Q.  now, i make some comments about the production.  if you havent seen the show and dont want ANYTHING to be spoiled, you can skip the second part of the show.  i wouldnt blame you.  i make a big spoiler alert/warning.

a couple of links for the show:

i may post another show later on in the week to get caught up.  i'll be talking about my trip to Dallas and the TX Fearfest that i attended.
Collapse